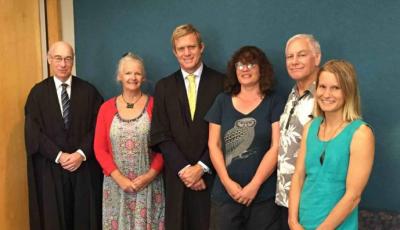 Communities should have the right to decide whether or not genetically modified organisms (GMOs) are released or field-trialled in their regions and, if so, whether any conditions should be placed on them, say the Soil & Health Association and GE Free Northland.

The two organisations again joined forces with Taitokerau mana whenua and others in court this week, responding to another case on the GMO issue brought by Federated Farmers, this time to the High Court in Whangarei. The judge’s decision is expected within a month.

“New Zealand has already seen inadequately contained GE field trials, in breach of the conditions of approval,” said Zelka Grammer, GE Free Northland chairperson. “We stand in support of the member councils of the Northland/Auckland Inter Council Working Party on GMOs, who are acting responsibly on their duty of care to the environment and constituents.”

“Federated Farmers claims to represent farmers, but many primary producers – organic and non-organic – are selling to high-value national and international markets that have zero tolerance for GE contamination,” said Marion Thomson, co-chair of Soil & Health.

Federated Farmers appealed the Environment Court decision in May 2015 that regional councils have the power under the Resource Management Act (RMA) to control the use of GMOs via regional planning instruments.

The Environment Court decision came about after Federated Farmers opposed Northland Regional Council’s proposed Regional Policy Statement, which included provisions relating to the use of GMOs in the region, and specifically included a policy requiring that a precautionary approach be taken to the introduction of GMOs.

Federated Farmers’ lawyer Richard Gardner argued in the High Court that central government passed the Hazardous Substances and New Organisms Act (HSNO) Act specifically for the purpose of controlling GMOs, and that parliament could not have intended for councils to duplicate that role under the RMA.

Dr Somerville argued that Environment Court Judge Newhook was correct in his decision that the RMA and HSNO Act hold complementary and not overlapping roles. The two Acts offer different purposes and functional responses to the regulation of GMOs in New Zealand. Thus, regional planning documents can control the use of GMOs as part of promoting sustainable management under the RMA, taking account of regional needs.

The HSNO Act has a more confined role of regulating the granting (by the Environmental Protection Authority – EPA) of approvals to import, develop, field test or release new organisms as a ‘one-off’ regulatory transaction. The regulatory functions of the EPA under the HSNO Act do not allow for the provision of a regional approach to GMOs. That can only be dealt with under the RMA by regional councils and unitary authorities through policy statements and plans.