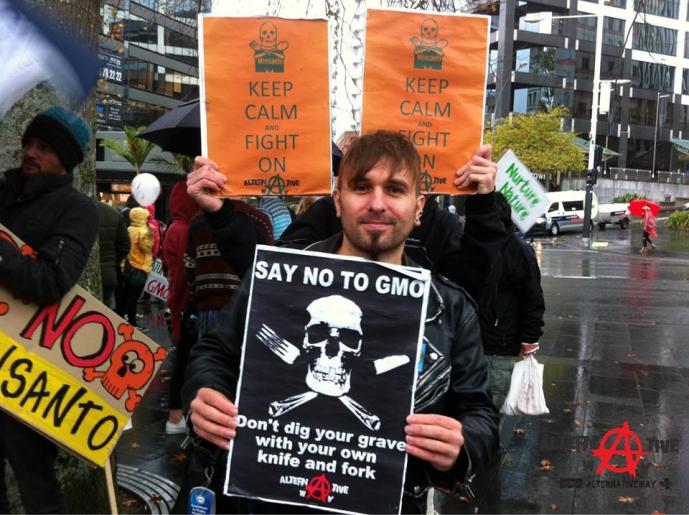 New Zealand was one of 52 countries around the world that protested on Saturday against genetically modified food that big agritech giant Monsanto produces.
The worldwide “March against Monsanto” is the first global protest against genetically modified food.
“The level of participation in New Zealand in these marches is evidence that New Zealanders want we offer – real food for real people,” says Debbie Swanwick, Spokesperson, Soil & Health – Organic NZ.
Thousands of concerned citizens marched in Whangarei, Auckland, Tauranga, Rotorua, Wellington, New Plymouth, Nelson, Christchurch and Dunedin.
“GE is but one issue that compromises the nutritional value and goodness of real food – pesticides and additives are others. In addition to protests consumers are voting with their wallets” says Swanwick. “Last year organic sales in New Zealand increased 8% and between 2007 and 2012 the total land area in New Zealand under organic certification increased by 67%.”
Genetically engineered plants are designed to resist insecticides and herbicides and it is suggested they increase yields but the 2009 Failure to Yield report by the the Union of Concerned Scientists proves they do not. They are also producing super weeds and super insects who have developed a tolerance and increasing the use of dangerous chemicals. Between 1996 and 2008, US farmers sprayed an extra 383 million pounds of herbicide on GMOs. Last year 80% of Americas corn was also compromised when the BT rootworm, that attacks it, developed a tolerance to the insecticide.
“GE crops always cross contaminate. Having only one crop is agricultural suicide if it fails, as America experienced last year with their BT corn crops, and US farmers have learnt from that experience. Many are choosing not to replant this year, but by far the greatest danger of GE crops is the threat they pose to human health,” says Swanwick.
“People need nutrients in their food, not chemicals,” says Swanwick “and it is long overdue that we took a stand against companies that breach our code of human ethics. If your policy is to compromise food that we feed our children our policy is to compromise your profits by buying organic. Thankfully New Zealanders have never been afraid to speak their truth in that way. We made world history when we declared ourselves nuclear free and yet again we are setting the benchmark for the rest of the world who already admire us for our clean, green image,” says Swanwick.
No GE crops are grown commercially in New Zealand.
Soil & Health – Organic NZ is one of the oldest organic organisations in the world and advocates for the consumer’s right to have fresh, healthy, organic food and water free of GE, pesticides and additives and their right to know what is in their food and water. Oranga nuku, oranga kai oranga tangata. To learn more about what is really in your food subscribe to their Facebook Page and subscribe http://www.facebook.com/OrganicNZ