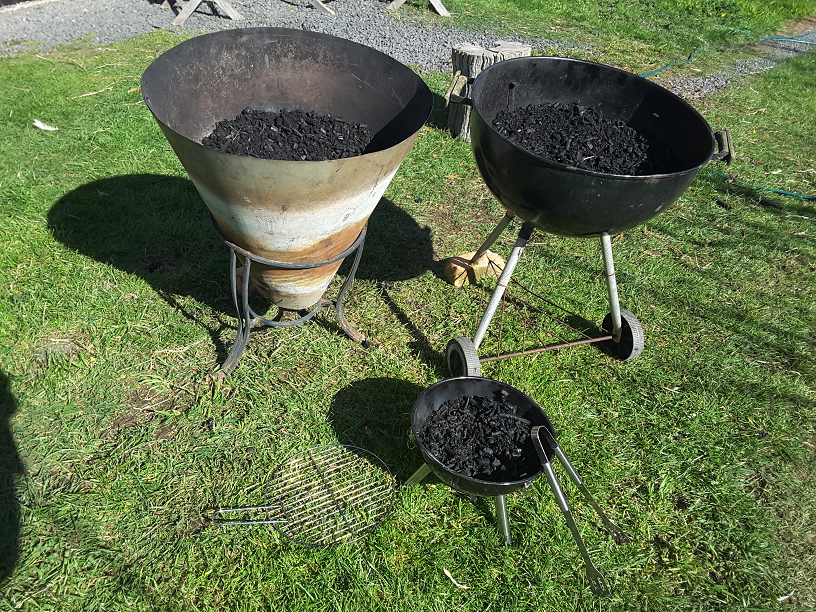 What could be better than a summer barbie with family, friends, and neighbours?

To Dennis Enright, the answer is obvious: switch out the barbecue for a charbecue. “It’s a lot of fun.”

You’ll still cook up your kai, and you’ll also make biochar (see sidebar). You’ll enjoy the usual social benefits, plus you’ll have a ready-made conversation starter. “By themselves charbecues are small potatoes, but they’re a great way to connect people to issues,” he says – issues like soil regeneration and carbon sequestration.

A charbecue differs from a barbecue by inhibiting the flow of air through fuel. When barbecuing, you burn charcoal in the presence of oxygen and get ash; when charbecuing, you heat wood, burning off its volatile components. Biochar’s the result.

To make a charbecue, just find a kettle barbecue, large or small, and close its air vents. It’s as simple as that. Kettle barbecues (see photos) are readily available on a commercial basis, and can often be found at recyclers.

It’s all in the burn

A good charbecue depends on the right fuel. Start small.

As your fire builds, you can add larger pieces, but there’s a limit. The inside of your wood needs to get hot enough to release volatile gases before the outside turns to ash. Just as smaller biscuits are easier to bake evenly than larger ones, smaller fuel is easier to char.

Maximum fuel size depends in part on your charbecue’s dimensions. Experiment, and break apart your biochar – once cooled – to check its insides. Dennis recommends keeping fuel to a finger’s width. Make sure it’s firewood dry, neither wet nor green. Don’t add materials that burn quickly to ash, like leaves. Dennis prefers shrub and tree prunings.

Your aim is a hot fire with flames only at the top. A vibrant flame cap will keep oxygen from entering your growing char bed. Any time your flames start dying or ash starts forming, add more fuel. Don’t add so much you get smoke.

Before you start to cook, build up a hot bed of biochar. Right before cooking, add smaller fuel to plug any gaps at the top of the bed, inhibiting the downward flow of oxygen. Ideally this small fuel chars quickly.

Once the flames have died, add a grill and you’re good to go. As you cook, your surface char will start turning to ash. The hotter your char, the quicker you cook, the less ash you create.

When you’re done cooking, you could rebuild your fire for more biochar. Whenever you’re finished, quench your fire thoroughly to keep your char from burning to ash. Dennis uses a watering can, creating a lot of steam and potentially kicking up char and ash. Be careful. Make sure your char is fully cool before use.

Dennis is sold on the convenience of adapting kettle-shaped barbecues. Even his miniature table-top charbecue works fine.

He has also made his own cone-shaped charbecue. The efficiency gains of cone kilns are likely negligible for charbecue-sized batches of char. Still, their fabrication is straightforward with the right tools.

“I’m not a good welder,” says Dennis, “nor am I an engineer.” He encourages novices to use their imaginations, have confidence, and experiment with dimensions. When welding, follow standard safety recommendations. Wear gloves when handling sharp metal.

Instructions for a cone charbecue

Biochar is a type of charcoal with unique properties and benefits.

How is it made?

Biochar is created through the pyrolysis of biomass (usually wood). In pyrolysis, a hot fire drives off volatile elements. Oxygen is strictly limited to keep wood from turning to ash.

How can you use it?

The above activities all ‘charge’ biochar.

Once it’s charged, you can:

What is ‘charged’ biochar?

Charged biochar is full of microbial life, improving soil fertility. When first made, it’s empty habitat. Charge it as suggested above, or soak it in a liquid manure. If you add it to your soil before charging, it will still enhance soil life, after a delay of several months to a year.

Biochar Network New Zealand: go to bnnz.org.nz and subscribe to their newsletter AllBlackEarth.

Dennis Enright is founding chairperson of the Biochar Network New Zealand (BNNZ, bnnz.org.nz), and director of New Zealand Biochar (nzbiocharltd.co.nz). He is a former co-chair of the Soil & Health Association.