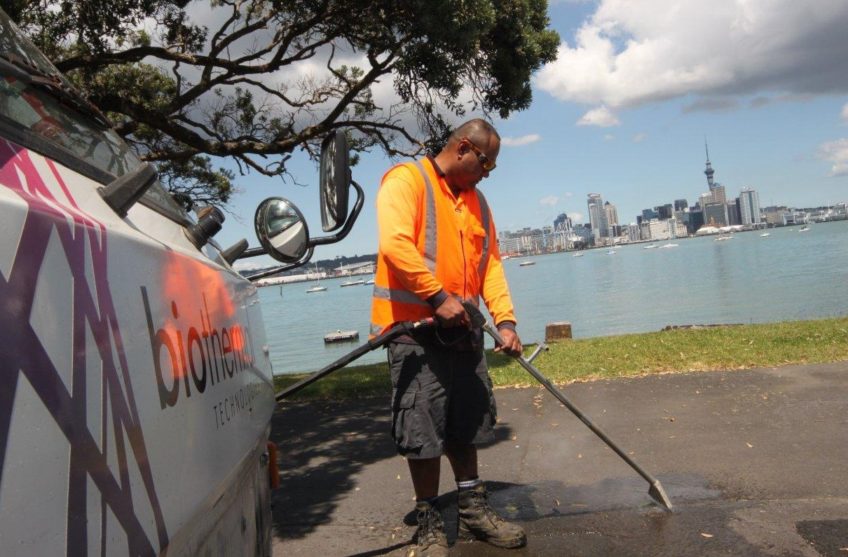 in our streets and parks

Hana Blackmore of the group Weed Management Advisory looks at council weed management practices and how we can make our neighbourhoods safer and healthier.

Almost as unnoticed it appears, is that a dozen borough councils in Auckland, including Ellerslie Borough Council, Devonport Borough Council and Waiheke Island County Council, did just that in the 80s and 90s. They implemented non-chemical weed and vegetation control policies that remain in place today. (Note that in the context of this article, ‘non-chemical’ and ‘chemical-free’ mean the use of safer methods of weed control – no harmful herbicides.)

So how come no one knows about it? How do so few realise that hundreds of thousands of people have enjoyed safe, chemical-free operations on roadsides and numerous parks in Auckland for over 20 years? This unawareness includes Hamilton City, which submitted this remit to LGNZ!

Swallowed up and obscured

The answer is because they have effectively disappeared from view. Local government amalgamations have successively merged these small councils into bigger cities, until they were swallowed up by the monstrous Auckland ‘Super City’ in 2010.

Although legacy spray-free weed regimes were retained, the Super City has failed to deliver any progress on a subsequent harmonising policy. Its structures and procurement policies have seen previously stable weed and vegetation control costs spiral. One early and much-quoted ‘authoritative’ estimate had the cost of non-chemical methodologies for the roadside at 800% more expensive than glyphosate.

This sort of nonsensical fiction is what is passed on to councillors and decision makers, and even outside enquirers. That the contracting authority, Auckland Transport, was and is implacably opposed to the use of anything but glyphosate on its roadsides may be the reason why the effectiveness and viability of alternative methodologies has been so successfully suppressed.

But cheer up! The legacy non-chemical policies have survived – just.

To all those communities and councils out there who would like to implement this remit and move to environmentally friendly methodologies – you can – and without breaking the bank. There is a wealth of knowledge, research and experience here in Auckland just waiting for you to tap into.

Bypass the ‘chemical cowboy’ cheerleaders. Go to the people doing the work, and developing and introducing not just the latest technology, but also the projects and strategies that reduce or eliminate the need for management – like bee parks and pollinator berms, and wildflower gardens and meadows.

Talk to the experts who wrote the best template policy in this country twenty years ago. Talk to the councillors and people who have held the line. They know. And their passion is contagious.

Collectively, the Auckland groups (including Weed Management Advisory) know about successfully transitioning to non-chemical and, because we are not perfect, the lessons learnt over the years.

Importantly, there is no silver bullet. It is not about simply substituting a glyphosate spray with another say, fatty acid one, or any of the effective thermal technologies now available. It is about taking an integrated approach.

It is here on the roadsides where one of the greatest public exposures to chemicals comes from. So it is also here where change to non-chemical weed control can have the greatest impact. And there is choice.

Today we not only have hot water (which has been used continuously on hundreds of kilometres of Auckland roads since the early 90s) but also steam – used on the roads since 2012. Hot foam technology is available in New Zealand and a contract in Auckland is already in place. Organic fatty acids and mechanical methods have also been used for decades in Auckland.

It is almost unnecessary these days to detail the detrimental effects on people and the environment from exposure to toxic chemicals. The majority of us would favour a precautionary approach, so there appears fundamentally to be only one obstacle to these safe methods being adopted across the country: cost.

While it has been accepted that in Auckland transitioning councils would pay a premium to protect human health (40% in 1999 Auckland), it may no longer be the case that there is nothing cheaper than glyphosate. Today, hot water and hot foam (and possibly steam) for integrated roadside treatment can match glyphosate.

Procurement policies for our health and safety

But procurement policies need to change. Full weed and vegetation control contracts should be let to specialist contractors who can tender in an open market. Subsuming weed control into full maintenance contracts, with every contractor and subcontractor taking a cut, results in unworkable margins or increased costs.

Here in Auckland, it has come to light that an accepted hot water tender was cheaper than the chemical one – over five years ago. Why did Auckland Transport keep this secret? The contractor is now offering to do any direct urban chemical contract for the same price, only non-chemically.

Our experience is that there is always misinformation out there when chemicals like glyphosate are at risk. They have been, and are, defended to the hilt. Before you start organising anything, read our ‘History and Timeline of Auckland’s use of Chemicals’ (on the Weed Management Advisory’s website – see sidebar). It may help you avoid the many pitfalls we faced and help you transition to a sustainable non-chemical community.

Thank you Hamilton for provoking us – it reminds us we still have so much work to do in Auckland. That nearly half of our youngest children live in areas where they still endure toxic pesticides on roads and in parks is a matter of shame. Auckland of all places has the tools to change this, and we must.

Hana Blackmore is a community researcher and advocate and founder member of the WMA. She lives on Waiheke Island.

Established in 2010, the Weed Management Advisory is an informal network of Aucklanders with an interest and expertise in environmentally sustainable weed management. They promote, encourage and support non-chemical and integrated weed management practices.