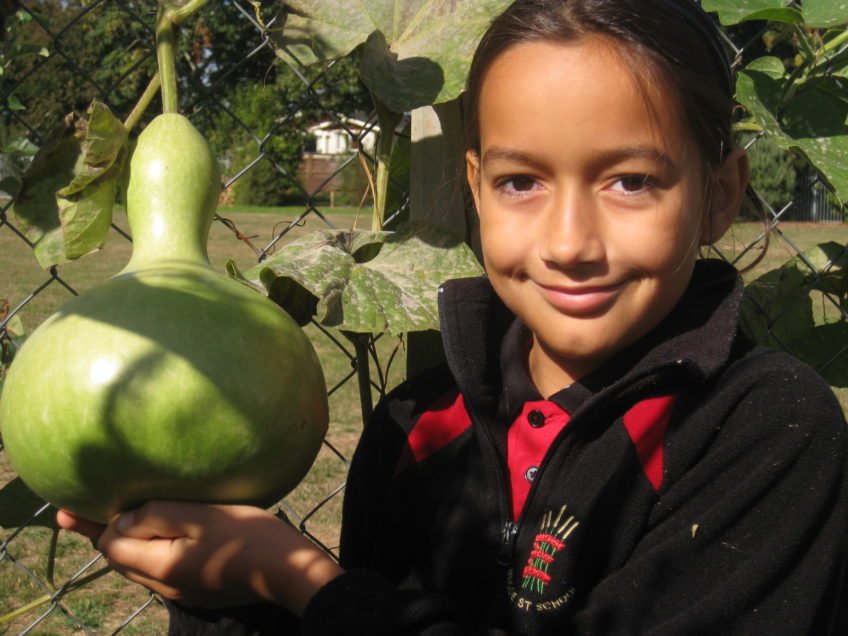 In 2012 and 2013, a team of New Zealand permaculture educators hit the road for an ambitious teaching and filming tour: the Localising Food Project.

They found a bounty of creative organising across Aotearoa, and captured the stories of 250 different local food initiatives on video. But they also found the networks often weren’t aware of each other. Now, they’re distilling a series of documentaries aimed at disseminating successful local models, and inspiring a more self-sufficient, food-resilient nation.

They were also pleasantly awed to find a newer community food trend taking off: the planting of fruit and nut trees in public spaces. A forthcoming documentary from the project will explain how various local councils and community members are working together to plant and maintain public food trees in their streets and parks.

The team also visited 50 school and preschool gardens, documented in the recently released film series Growing Schools. The doco shows the benefits of gardening for children’s motivation, academic success and overall wellbeing. It’s already attracting international attention, and is being translated into Slovenian, Spanish and French. The four-part series can be downloaded from the Localising Food website (see sidebar).

Where are the gaps?

Still, the team found plenty of gaps in local food resilience in New Zealand. Community gardens, while numerous, are not producing nearly the capacity of food that they could. Instead, they focus primarily on social wellbeing. Raw milk distribution networks are flourishing, but often in black-market-type situations, which are likely to be driven further underground when new regulations come into force in March.

In one of the biggest obstacles to national food self-reliance, New Zealand’s once-thriving mixed grain farms have largely given way to dairy monocultures. Grain processing equipment has become derelict, and certified organic grain processing infrastructure is particularly lacking. Investment is needed if New Zealand is to live on its own grains again.

The team’s next documentary, soon to enter production, addresses a fundamental basis of food systems: seeds. Local seed-saving networks are crucial to our collective food future, as corporate control of seeds increases globally and biodiversity decreases. Around 90% of all seed varieties have been lost in the last 100 years, according to the UN Food and Agriculture Organisation. But unlike a monetary bank, a seed bank can’t function as a closed vault; as the Localising Food team is documenting, successful seed banks are living community networks, with social and geographic resilience.

One lesson for seed saving is similar to saving computer data: back everything up! The Southern Seed Exchange’s Christchurch seed bank burned down, and is now replaced by a solid earth building. Thankfully, some of those seeds had been replicated and stored at Waimarama Community Gardens in Nelson. Mould destroyed seeds stored in an old wooden building in Dunedin; unspoiled ones were divided in half, with half stored at the Riverton seed bank to ensure a backup set.

Dedicated kaitiaki [guardians or caretakers] are vital to the survival of heritage seed lines, but there is a shortage of such people around the country in comparison with

the amount of genetic material that needs propagating and protecting. New Zealand has some excellent community seed-saving models in place, but many bioregions have no seed networks at all.

One of the most important seed repositories and distributors in New Zealand is Koanga Institute in Wairoa, Hawke’s Bay. Heirloom seed gardens are a core feature of this farm. Of particular note are the ‘isolation gardens’ in the next valley over – essential for crops that would otherwise cross-pollinate. Such geographical sanctuaries could become even more important safeguards against contamination if GE crops are ever allowed to grow in New Zealand. Other growers around the country also grow seeds for Koanga, acting as kaitiaki of specific crops.

However, one doesn’t need to go big to run a seed network; the main requirements are determination, love of seeds and good record-keeping. An avid seed saver in Port Waikato offers her seed locally through her personally handwritten catalogue and is only contactable for two hours in the evening by phone – no deterrent for her regular customers.

Using New Zealand’s leading seed savers as teachers in their own gardens, the Localising Food seed-saving doco will be a call to action and a lively how-to manual. The film, which will be released later in 2016, will strive to inspire Kiwis to save seeds locally, and will teach gardeners how to save their own seed and set up their own bioregional seed banks and seed exchanges.

Robina McCurdy is director of the Localising Food Project, and has a diploma in seed technology and in permaculture. For 30 years she has been an international permaculture and organic educator-activist, with a passion for seed saving and food sovereignty.

Rebecca Reider is an organic systems researcher, writer and advocate based in Golden Bay.

The Localising Food website (www.localisingfood.com) contains a wealth of articles and video clips about local food production systems in NZ, plus free downloads including a seed-saving chart and 10 seed-saving tips.

The Localising Food films are funded entirely by donations and sponsorship. To produce the seed and public tree crop documentaries, the team is running an online crowdfunding campaign on PledgeMe (www.pledgeme.co.nz) is seeking more sponsors. Can you help? Please contact .